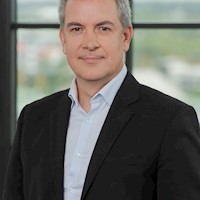 Since 2018, Christophe Giral is in charge of Euro Disney's tourism and real estate development activities. The Real Estate development team (“Real Estate Development by Euro Disney”) that he heads is responsible for the development of the leading European tourist destination Disneyland® Paris and the town of Val d'Europe (today 35,000 inhabitants, 35,000 jobs).
Christophe joined Euro Disney in 1991, while a student, for a seasonal security position while the site was still under construction, then, in parallel with his studies, he continued his collaboration within the operational teams. He has carried out various internships or projects such as the inauguration of the Space Mountain attraction, the organization of a major Elton John concert and the development of projects of the urban planning and architecture of Disneyland. ® Paris, winner of the international prize for excellence from the FIABCI (International Federation of Real Estate Professionals). Subsequently, he joined the Real Estate Development team to participate in the Disney Village extension project. In 1998, the group entrusted him with the creation of an innovative commercial project: the Val d'Europe shopping center and La Vallée Village. After leaving Euro Disney for 3 years during which he successively took responsibility for tourist development for the Monegasque group Pastor and then won the competition for the "Carré de Soie" shopping center (Lyon) for the Altaréa group, he was called back by the Euro Disney group to oversee the economic development of Val d'Europe and structure the strategic approach of the company's operating real estate assets. In 2010, he created the Corporate Real Estate Department of Euro Disney responsible for developing and implementing a new strategy for the deployment and repositioning of the Campus of this extraordinary company (single - site campus of 16,000 direct employees, plus of 500 different professions).
Christophe is a graduate of ESC Compiègne and followed specializations at ESSEC Executive Education and Political Sciences Paris.
View all Speakers

“I was really impressed with Recharge. It was my first time attending and having been to hundreds of networking events in the past, Recharge certainly attracted a very generous number of senior & executive level likeminded individuals. It wasn’t an event looking to fill quotas, but to genuinely bring together industry leaders and rising talent to share valuable knowledge and insights on key industry trends and developments. The venue was very good, the staff highly attentive and it was definitely worth travelling all the way to Paris to attend. Huge thank you to the International Hospitality Media team for organising. I will see you again in 2023.

A recap of the wonderful experience at RECHARGE 2022, where 100% of attendees said they would attend in 2023. Business, learning and fun all wrappe…

Europe: New research from Savills shows that European serviced apartment supply is forecast to expand by 21.2 per cent over the next three years.

Channel Islands: A 103-key Wilde by Staycity aparthotel will anchor a £120 million mixed-use scheme in St Helier if plans are approved.

UK: Liverpool City Council has said that coliving developments must adhere to residential policies set out in its newly adopted local plan, including …

Thanks for taking your time to subscribe. Keep an eye out in your inbox for updates and news about the Serviced Apartment Summit.